Hello, can we help you find something? 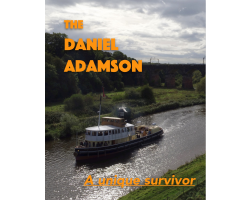 AN INTRODUCTION ABOUT THE FILM -

For more than five years The Danny and its crew of supporters and volunteers have been watched and filmed by a team of film producers who have been there at all the poignant moments relating to the restoration of the 1903 steam ship.

The resulting film, offers a moving tale about the power of the many men and woman who have got involved in the project and given so much to The Danny, which has been for many a huge part of their lives (and their families).

The film producer has captured many interviews with the volunteers who have all worked on a common goal, to see The Danny restored and on the North West Waterways once again. Which of course is what they did achieve, but the film also reveals a lot more!

The story of The Danny is also about friendship and personal achievement and the film listens to the many stories of the people behind the project and cleverly reveals the emotion behind the hard work and the details nobody was ever aware of.

The essence of the story should make all involved feel honourably proud of what they have done, and it is hoped the film stylishly shows this off, as well as capturing a wonderful and inspiring story.

THE FILM LASTS FOR ONE HOUR

DigiTickets
How can we help?

I'm having trouble with my purchase!

Tell me more about DigiTickets!